The premiere of our new show, Eve's Game, has delighted audiences and received excellent reviews, and had a sold-out May season. Created by Jo Willans and Tim Monley, Eve's Game premiered for Anywhere Festival on May 8.

Audiences were delighted by Eve's vivaciousness (played by Ashlea Slowman) and the charm of Miegunyah House, built in 1885. Tea was served, cookies were eaten, clues were sleuthed, and pianos were played. Some audiences commented on the humour in the show, its feminist themes, while some stayed to chat about their mothers and the sacrifices former generations made, and the different roles women have had.

We have plans for future seasons of Eve's Game and look forward to sleuthing clues and slurping tea (pinkies out) with you soon.

"There are a few occasions when I come out of a show and can’t wait to see it again. Immediately. Sadly for audiences, the current world premiere run of Eve’s Game is already sold out. Let’s hope that Republic of Song will be able to offer future Miegunyah House performances soon, as this is a must see show that is both fun and thought-provoking." - Catherine Lawrence, Reviewer

"Evidently written with a feminist lens, Willans has skilfully written a piece which immerses audiences into the potential thoughts of women in the 19th Century. In a predominantly male-written period, pieces such as Eve’s Game allow contemporary audiences to hear the voices of the women who were not given the opportunity to do so." Georgia McKenzie, Reviewer

"Such a pleasant and intimate theatre experience, ten patrons become the guests of Brisbane’s popular and engaging Eve Harrison...The one hour theatre world premiere of Eve’s Game not only explores the Victorian Brisbane times, but feminism in the 19th century, mother-daughter relationships and rites of passage. Ironically my adult daughter attended with me who thoroughly enjoyed the historical education of not only life in the 19th century but life for women, plus she had a lot of good old fashioned fun!" Josie Montano, 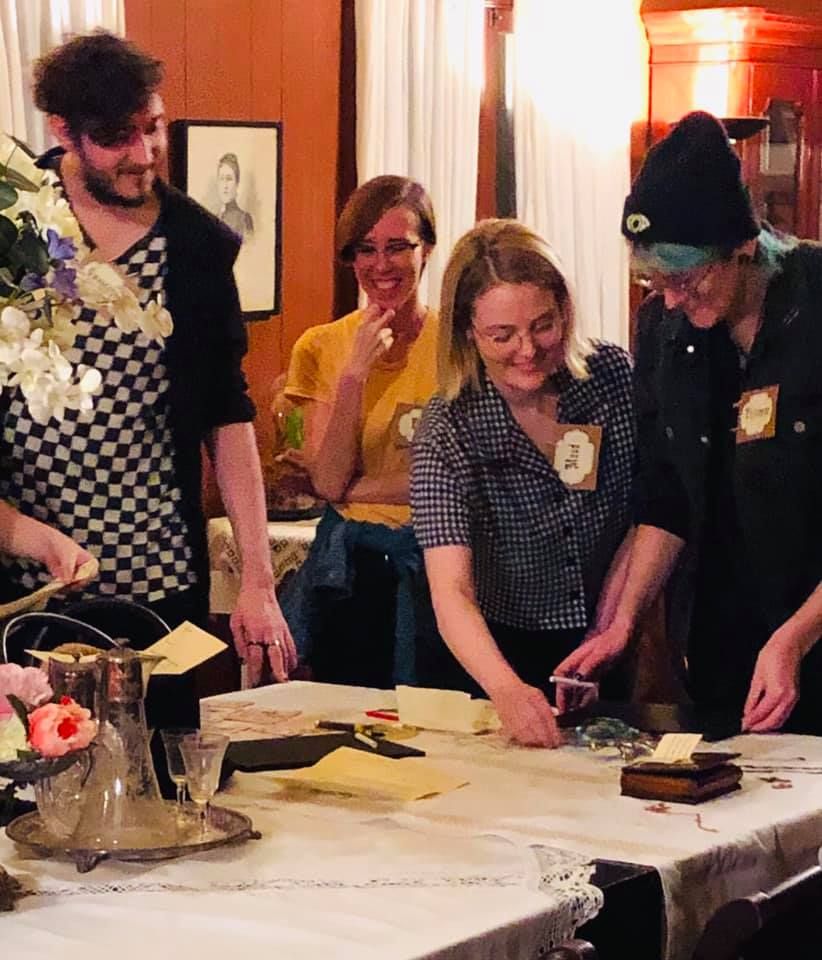 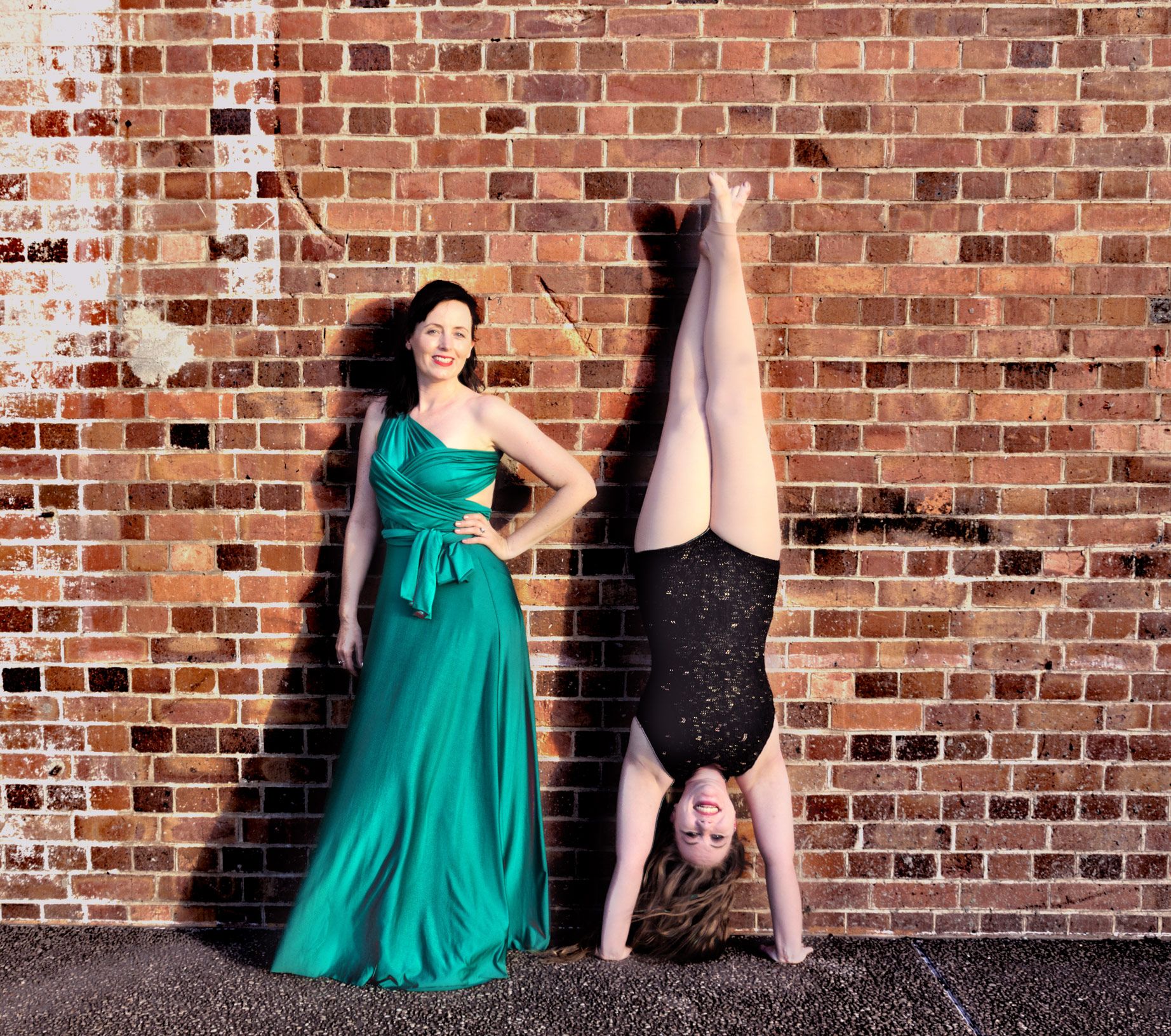 Following a critically-acclaimed, sold-out season at 2018’s Anywhere Theatre Festival, we're delighted to be bringing The Ballad of Rosie Quinn to life again for this year's Valley Fiesta. 2018 will be the first year that the Fiesta's programme has offered theatrical events, and will bring audiences into unusual Valley venues for fringe-style events. The Ballad of Rosie Quinn will be presented in one of Fortitude Valley's oldest spaces, the world heritage-listed Holy Trinity Church Hall. This sonorous space will be the perfect companion for Rosie's haunting tale of convict Brisbane. Join us from August 31 for this special event!

“A deeply moving production, with such clever attention to detail in designing a non-visual show, The Ballad of Rosie Quinn is a chilling reflection on our history and the way that we remember it.” – Elise Lawrence 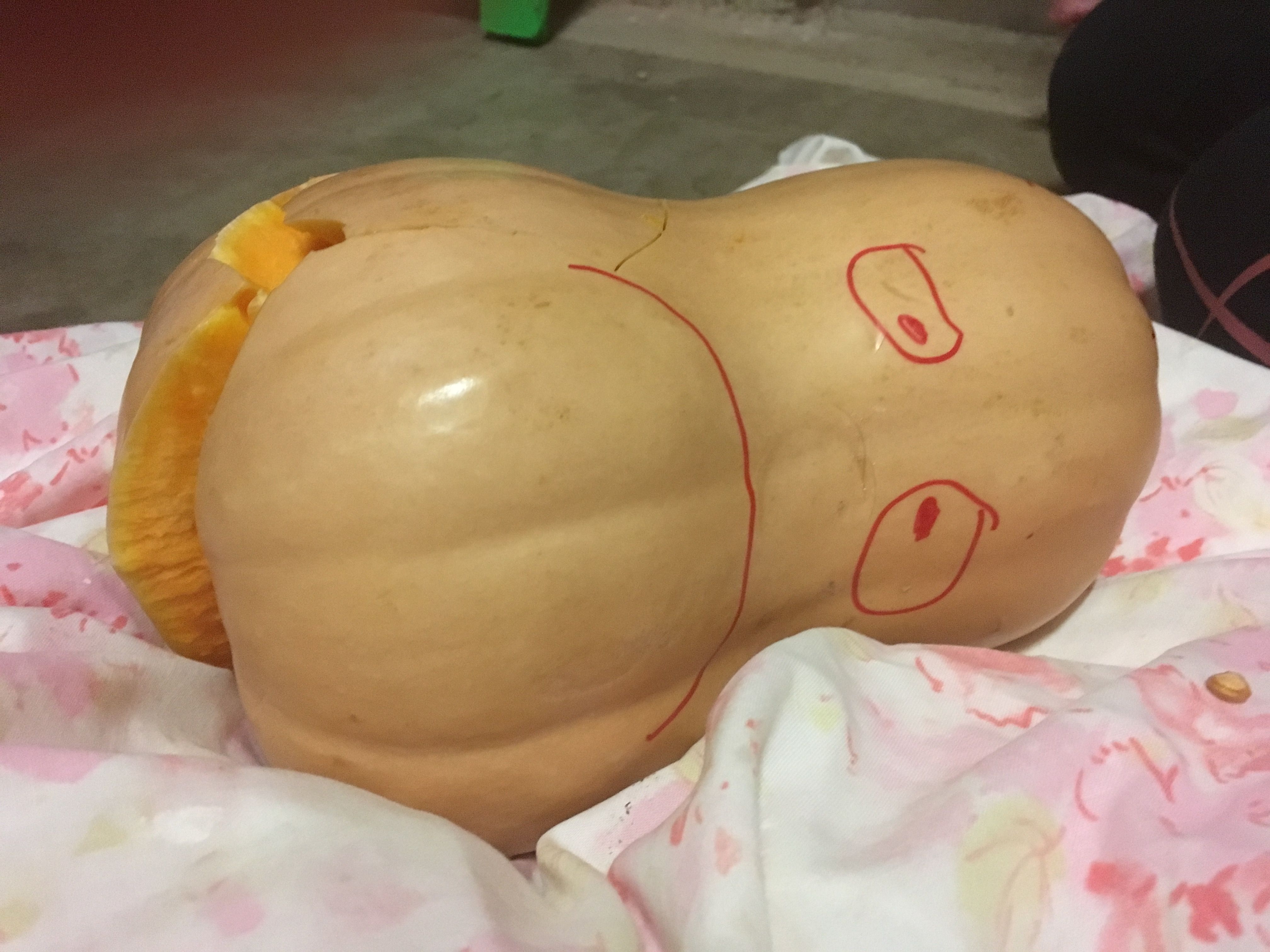 We have premiered The Ballad of Rosie Quinn with Anywhere Theatre Festival, and our season was sold-out! Audiences were delighted and entranced with our tale of young convict girl Rosie Quinn, and her plight in the penal colony of Moreton Bay. 5-star reviews! What more could we ask for? Another season, of course! We plan to take the story of Rosie far and wide, so keep checking in if you were disappointed and couldn't get a ticket this time, because we will be back.

Were you one of the screamers? On the first night, a couple of people received some strange sensations across their feet, while others smelt some earthy scents, and others received some startling sounds. Be alert, but not alarmed. All our effects are created with household objects! This pumpkin was a victim of our experiments, and now is sprouting many new pumpkins in the vegie patch!

A big thanks to the team at #anywherefest who managed the whole process of us presenting at the amazing Spring Hill Reservoirs. This amazing space, held by Brisbane City Council created so much atmosphere for our show. We are very grateful for the opportunity to use this haunting space.

Check out the reviews, and we'll see you soon! 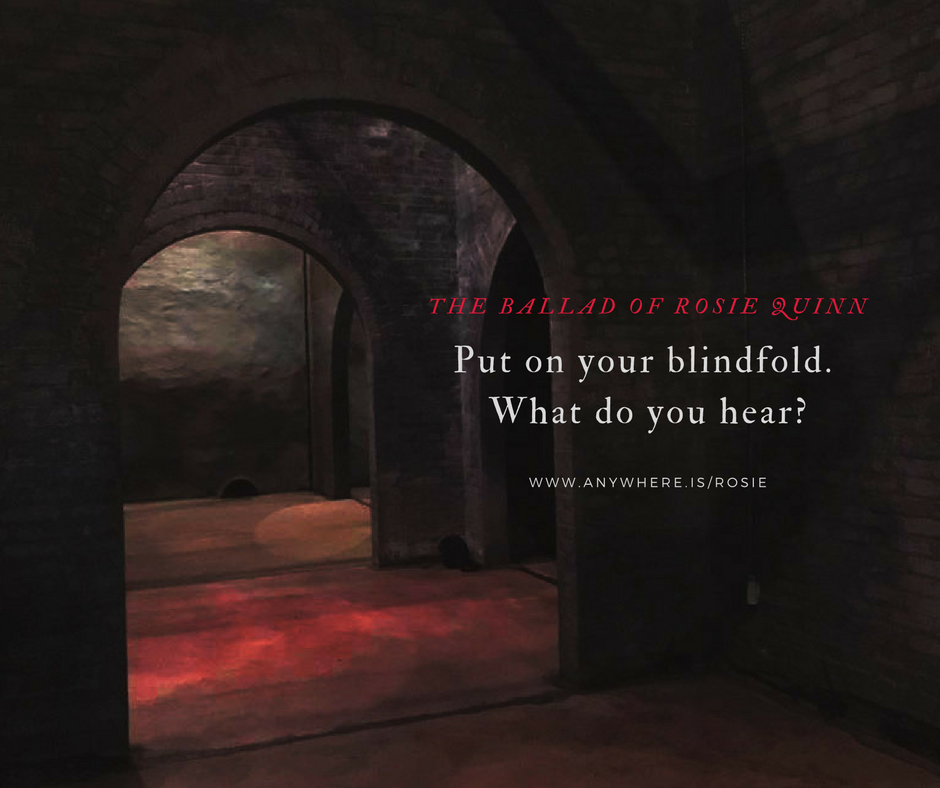 We are proud to be presenting The Ballad of Rosie Quinn at this year's Anywhere Theatre Festival, May 18-20. This original work, written by Jo Willans, is a special theatrical experience because the audience will be BLINDFOLDED! It's a sensory experience that tells the tale of Rosie Quinn, a young convict in the hellish Moreton Bay Penal Colony. The colony was the birth of Brisbane, and was renowned for its brutality. The story focuses on the harsh and difficult lives of the women, which were completely dominated by men. It's part ghost story, part folklore, with some folk music in the mix!

We'll be taking up residence in the incredible space of The Spring Hill Reservoir to create this special event. It's a fascinating underground space, filled with archways, and it rests at the foot of the convict-built Old Windmill. This dark, atmospheric, acoustical space is the perfect setting for our tale. Be brave, and book today! Tickets are through Anywhere Theatre Festival: www.anywhere.is/rosie.

Chill Out for Christmas and support the Cure Brain Cancer Foundation 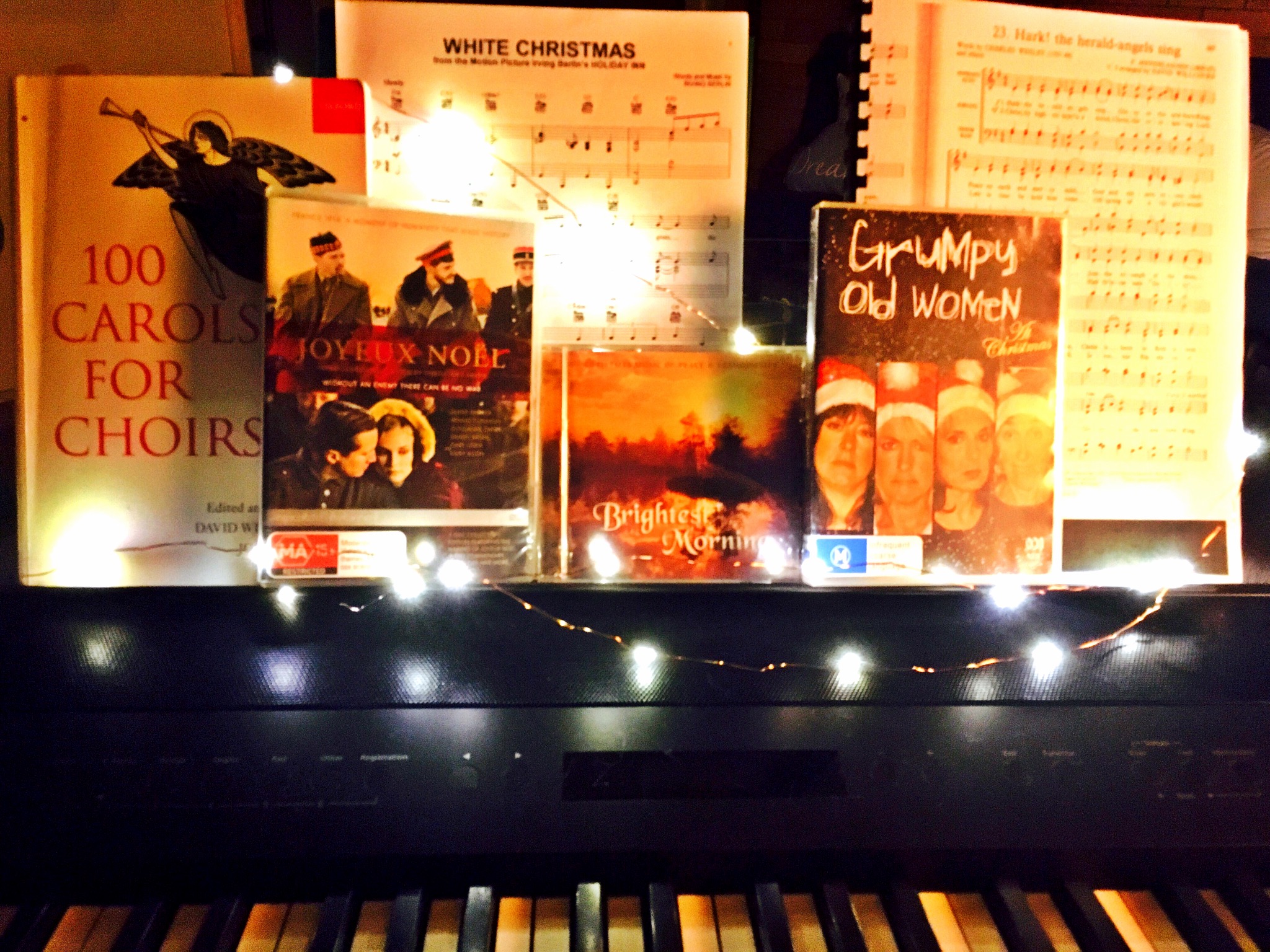 We’ve been watching our favourite Christmas movies both old and new, and digging through piles of music to put our Christmas Chill collection together. We’ve chosen old and new favourites, and Jo has been busy arranging some golden oldies in a new way for the amazing voices we have gathered. Christmas Chill is the perfect antidote for the rush and stress of the Christmas season. It’s all about taking time out and revelling in one of the great joys of Christmas – carols! Warm up your voice, dig out your descant, hum your harmonies, because we want you to join us in singing some of these Christmas delicacies! And know that $5 of your ticket is helping the Cure Brain Cancer Foundation. Book your ticket today!